The Family Guy episode, “Dream of Jesus” most certainly displays the ‘Jesus is my friend’ tenor of American Christianity, and I too find the dinner table scene quite hilarious.

I think the “feeling of discomfort” which you describe, imbued by your Catholic aunt, when seeing Jesus portrayed without sanctity or holiness and so casually is felt by many.  Her conceptualisation of a sacred and holy Jesus, deeply rooted in her faith, has certainly stayed with you.  Many in our generation may not have ‘Christian’ parents, but the chances of our grandparents having this conceptualisation are much greater.  Their thoughts, I’m sure, have an impact on our thinking – especially as youngins’.  And so, though we often laugh at Jesus’s behaviour on screen – especially with lines like, “Peter, I think you may be my saviour” – there is certainly an underlying feeling of, at the very least, discomfort at the derision of the sanctity and holiness of Jesus.  I certainly feel it.

Your last point on the idea of the friendly, “local neighbourhood Jesus”, figure that appears in American Christianity is strictly limited to appearing in North America is something I completely disagree with.  Saint Young Men (聖☆おにいさん Seinto Oniisan), is a Japanese manga series that tells the story of Jesus Christ and Gautama Buddha as roommates in Tokyo taking a vacation on Earth.  The four volumes of the series have sold over 2.6 million copies and it was the tenth best-selling manga series in Japan for 2009.  In it:

“Jesus is portrayed as a care-free, generous, and humorous “sei-jin” (holy man or adult in Japanese) … Jesus is very friendly to his apostles. But because Jesus is even nice to Judas, this makes Buddha worry.  Whenever Jesus’ emotions are at a high or low peak (due to finding something funny or being scared), miracles may happen unexpectedly.  Jesus is a devout follower of drama shows, and reviews them on his online blog.”

(Read more at the Wikipedia article to enjoy the hilarity). 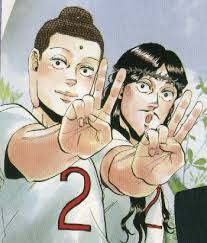 This is one extremely fantasic(ally hilarious) example of Jesus being portrayed in a similar fashion of the “friendly Jesus” or even more liberally than found in American Christianity — outside of North America.